As you are probably aware if you read this blog consistently, we think Opportunity Zones have great potential for taxpayers/investors.  In fact, since last fall, many of the uncertainties around Opportunity Zones have been cleared up through IRS regulations.  Most people are not expecting any more official IRS guidance release so the rules of the road are now set.

As a reminder, here’s the high level overview:

“Opportunity Zones” are included in the new tax law known as Tax Cuts and Jobs Act of 2017.  These zones encourage private sector investment in low-income community businesses which are inside defined census tract lines throughout the United States.

The new tax code allows any taxpayer to defer gains until the earlier of the date on which the opportunity zone investment is sold or December 31, 2026 on the sale of any property to unrelated taxpayers by investing the gain in an Opportunity Fund, which in turn must invest at least 90% of its assets, directly or indirectly, in businesses located in certain low-income communities designated as Opportunity Zones. 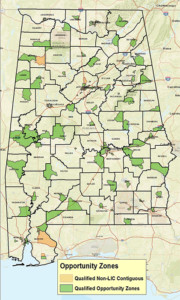 Hat tip to bill sponsor (and friend of the blog) Rep. Bill Poole of Tuscaloosa.

For a more detailed review of those impacts, I recommend reading our friends at Opportunity Alabama’s summary of the AIM bill, or contacting your JMF tax adviser.